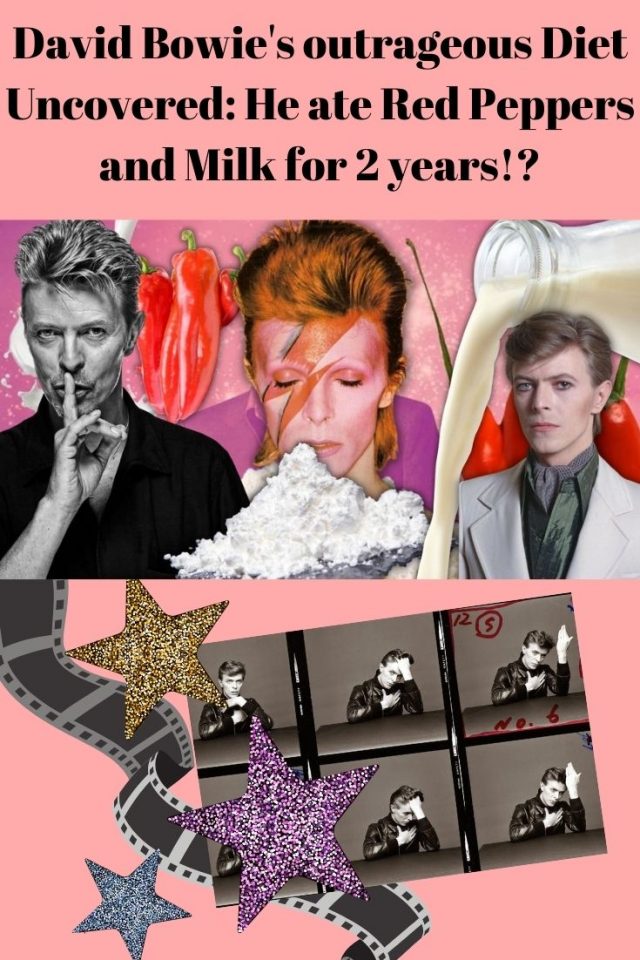 We all know the man who sang “Space Oddity,” “Hero’s,” “Ashes To Ashes,” and pretty much many of David Bowie hits in the ’70s.
His long and diverse career spanning two generations is thanks to his impressive talent for reinvention, which allowed him to produce cutting-edge sounds ranging from glam rock and soul to electronica and jazz.
And yes, I’m talking about the great David Bowie- a music and pop culture icon and a musical chameleon with several personas.

With several personas, David Bowie was an erratic man who indulged in a crazed diet and had a shadow of mental illnesses haunting him throughout his life.
Here is the true story of how David Bowie lived off milk, red peppers, cocaine, and cigarettes for two years straight.
But first, who is David Bowie, and what messed his life up so much?

David Robert Jones, also known as David Bowie, was an English singer-songwriter, actor and considered one of the most influential musicians of the twentieth century. Critics and musicians praised him, particularly for his groundbreaking work in the 1970s. His music and stagecraft had a significant impact on popular music, and his career, distinguished by reinvention and genius visual display in the industry. David Bowie was born in Brixton, South London, and grew up with a passion for music. Before beginning a professional career as a musician in 1963, he studied art, music, and design.

By the time he was 13, David Bowie was already playing the saxophone. His half-brother, Terry, introduced him to the worlds of rock music and beat literature, exposing him to the influences that greatly impacted his creative growth.
It turned out that Schizophrenia was deeply coded into David Bowie’s family. When Terry and David were little kids, they had a physically and mentally abusive grandmother to them. And so, having a family line with a DNA of mental illness was normal to them.
However, their problem with Schizophrenia only came out when triggered by stress or disaster at a particular moment in time. And after the episode, they would come back as their original self.

As Terry grew older, he had a severe mental illness, and the family felt that it was in their best interest to commit him to an institution. This haunted David Bowie for some time. In 1986, Terry took his own life after suffering severely from mental illness. Tragic though it was, the death of Terry came to serve as the inspiration for the song “Jump They Say.”
From then on, David Bowie always wondered how he would end up succumbing to Schizophrenia. After all, it was an unavoidable genetic code in their family line.

Overtime during his music career, David Bowie collected a series of personas. And about his personas, he had 11, and they were: Major Tom, Ziggy Stardust, Aladdin Sane, Halloween Jack, The Soul Man, The Thin White Duke, The DJ, Pierrot, Screaming Lord Byron, Jareth the Goblin King, The Blind Prophet. It was his way of coping with many Schizophrenic tendencies. He also came out gay in 1972, as a bisexual in 1976, and a closet hetero in 1993. No label could define David Bowie.
He also used these personas for his album concepts—a genius idea, to be honest.
In 1972, David Bowie’s album, “The Rise and Fall of Ziggy Stardust and the Spiders from Mars,” featured Ziggy Stardust’s character. He is an alien sent to Earth in the last five years of his mission to disseminate hope.
You:
David Bowie later claimed that his next album would be “Ziggy goes to America” after the “death” of Ziggy Stardust. And then, Aladdin Sane was created.
In 1974, he shifted to another persona. The idea for Halloween Jack, a character for the 1974 album and tour known as “Diamond Dogs,” was birthed on Halloween night in 1974.

You:
As most of David Bowie’s personas were creative, one of David Bowie’s many personas was the Thin White Duke- a dark character who was very controversial.
The Thin White Duke was an empty man who sang about romance while feeling nothing, “dry ice masquerading as fire.” This persona has been described as “an emotionless Aryan superman,” “an emotionless zombie,” and “a mad aristocrat.” Though he was an actual human, David Bowie’s characterization of the character described him as “extremely Aryan and fascist; a would-be romantic, devoid of emotion, which spouted a lot of neo-romantic dogma.”
While he was in Los Angeles, Bowie played the role of “The Thin White Duke.” The character was known for expressing pro-fascist opinions in interviews. The Thin White Duke was highly controversial. Aside from promoting fascism, some people claimed it was a “Nazi salute” and spent immersed in Satanic symbols.
As it turns out, his erratic behaviour and fascination with the Nazis and the occult resulted from drug-induced paranoia and depression. They stated that his mental state made it a period of great personal danger for him. He was physically and emotionally exhausted, and David Bowie’s sanity was being questioned. It did not take long for him to conclude that the Thin White Duke was a despicable creature, and after that, “an ogre.”
During his time as “The Thin White Duke,” this made sense because this was one of David Bowie’s darkest moments. After all, he used “astronomical” amounts of cocaine and amphetamines. He also tried staying awake for days on end and using red peppers, milk, and hard drugs to sustain himself.
Over that year, he consumed large amounts of red peppers, cocaine, and full-fat milk, but he could barely remember anything that happened within those two years.

Let’s go deep into his peculiar diet:
Back then, rock stars used cocaine and said, “it was the fuel of the music industry in the ’70s.” Indeed, David Bowie used cocaine to fuel himself up and stay awake all night, the next day, and the days soon after. But, David Bowie kept using cocaine to remain alert and allow his creativity to flow when writing songs. However, his excessive use of cocaine resulted in paranoia and tapping into his family’s genetic code of Schizophrenia. He was constantly fighting over his demons in his emotional plane.
As for his diet, David Bowie ensured that he would not die of starvation through red peppers and milk. But it was severely deficient in vitamins and minerals, as well as amino acids. In addition to malnutrition, he would have developed multiple deficiencies, muscle breakdown, and general malaise from his low-calorie diet. He perhaps assumed that he would get all the protein and vitamins he needed from milk and peppers, and thus, nothing else was needed to sustain his life.
And since milk is full of calcium but only 10% of magnesium. Having a deficiency in magnesium causes the body to be unable to relax, leading to muscle cramps and heart problems, including high blood pressure. Which caused him issues soon. In addition to his diet, only living off full-fat milk and red peppers would be deficient in vitamin B12. And vitamin B12 is necessary for the nervous system, digestive, and sleep function.

On June 23, 2004, David Bowie cut short his concert in Prague because he felt a sharp pinch. Two nights later, during his performance in Germany, David went backstage but suddenly collapsed. When he was rushed to the hospital, it turns out that he just suffered from a blocked artery. Thinking it was nothing, he did not get any medical help.
And because of his health problems due to his abusive behaviour to his body in his 20’s to ’40s. He took a long break from performing live performances. Only to show himself on stage here and there.
In 2013, David Bowie was diagnosed with liver cancer and was in chemotherapy treatment. On January 10, 2016, just two days after David Bowie turned 69, the 70’s pop icon died. Despite David Bowie’s great music, unique personas, tragic mental, physical, and internal illnesses, David Bowie will always be remembered as “The Rock’ N’ Roll Chameleon” who never stopped reinventing himself. 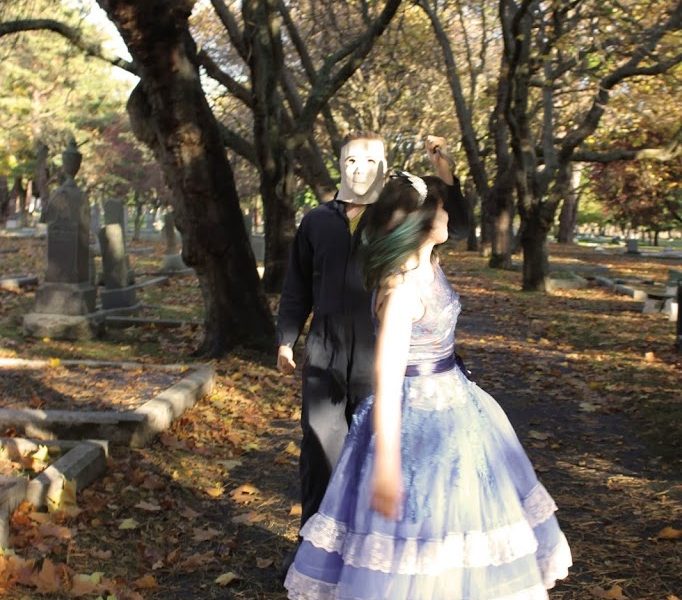 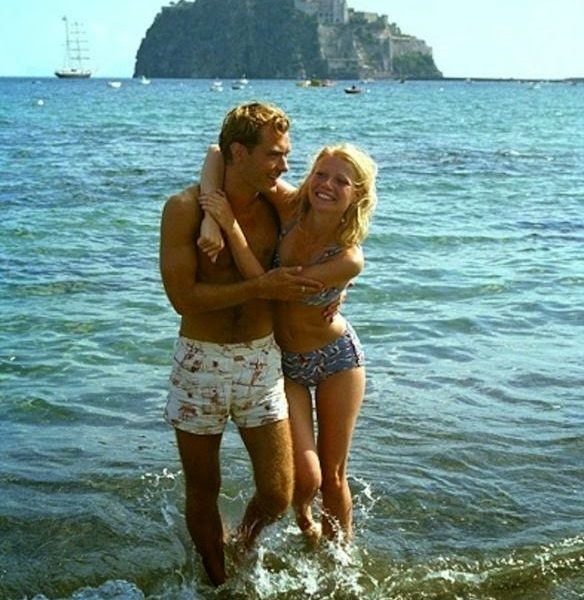 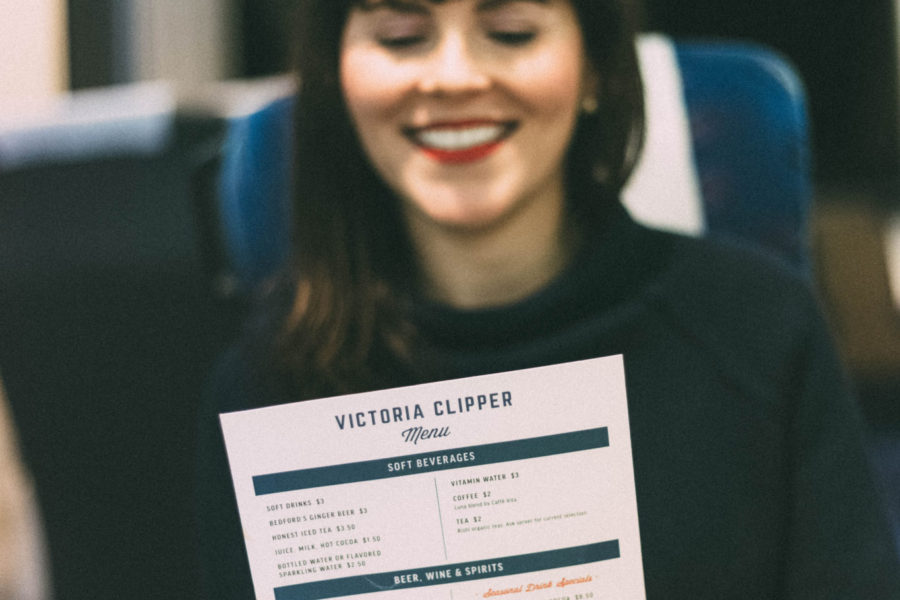