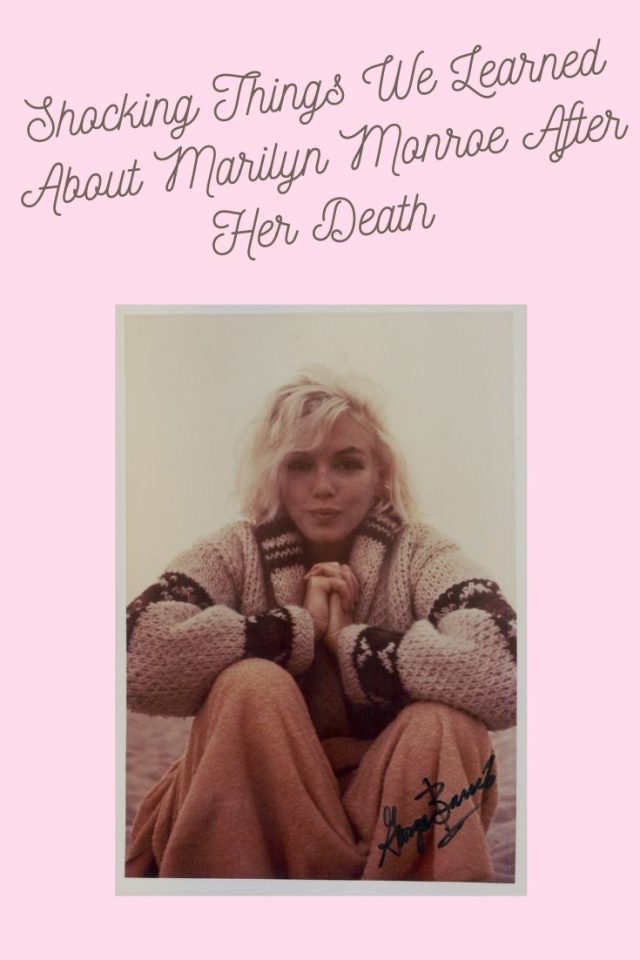 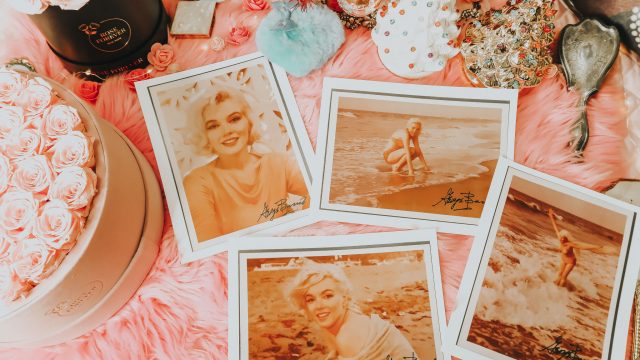 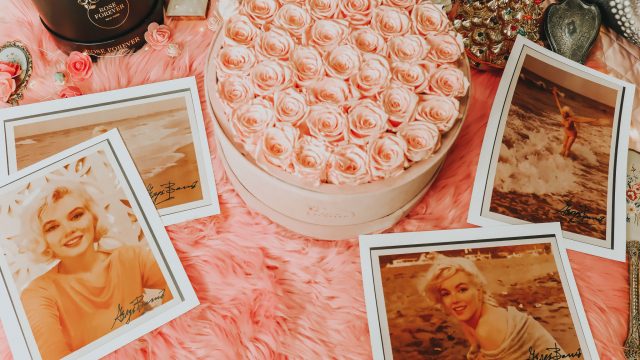 Shocking Things We Learned About Marilyn Monroe After Her Death
Marilyn Monroe was known for her timeless beauty and sensuality and is easily one of the most significant pop culture icons from the 20th century. Despite being super famous, Marilyn Monroe was depressed.
She had a very troubled childhood and a series of miscarriages that led to a decline in her mental health. Although she seemed happy on the surface and had millions of adoring fans, did anyone really know her?

She was incredibly lonely.
Marilyn’s life was marked by tragedy. She was abandoned by her mentally ill mother, who had once tried to kill her. Marilyn grew up in a series of foster homes before getting married at the age of 16 and dropping out of high school. While her star was on the rise, she was advised to tell people that her mother was dead. This, along with the fact that she never knew her father, further contributed to her isolation and desire to have a family. She had trouble maintaining relationships and was divorced several times. Perhaps because of her troubled childhood, Monroe desperately wanted to become a mother. While she conceived several times, she miscarried each baby, leaving her distraught and heartbroken.

Monroe was close friends with fellow screen legend Judy Garland who shared a story involving a conversation with the ill-fated star in a 1967 issue of the Ladies Home Journal. People later recounted what Garland wrote about her conversation with Monroe, who, while following Garland from room to room at a party, told her that she was scared and that if the two could talk, she knew Garland would understand where she was coming from. Garland said, “Maybe I would. If you’re scared, call me and come on over. We’ll talk about it.”

They never did get a chance to get together and talk; Monroe died shortly after the exchange. Garland herself would succumb to her loneliness within a few years, dying of a drug overdose in 1969.

She loved to read
While Monroe often played a quintessential “dumb blonde” on the silver screen, she was deeply intellectual. An avid reader, she had hundreds of books lining the shelves of her California bungalow ranging from classics like James Joyce’s Ulysses to child-raising manuals. And the books weren’t just for show, either. At the time of her death, it has been reported that Monroe was reading two novels, Harper Lee’s To Kill a Mockingbird and Leo Rosten’s Captain Newman MD.

She was politically very liberal.
Monroe’s politics swung to the far left. Her on-screen persona may suggest that she had little interest in the turbulent political climate, but in real-life was an avid supporter of the civil rights movement. She lived a privileged life but was very aware of the injustices that surrounded her.

Frederick Vanderbilt Field, a Monroe friend, wrote about her political views in his autobiography From Right to Left. “She talked mostly about herself and some of the people who had been or still were important to her,” wrote Field. “She told us about her strong feelings for civil rights, for black equality, as well as her admiration for what was being done in China, her anger at red-baiting and McCarthyism and her hatred of (FBI director) J. Edgar Hoover.”

It was Monroe who helped songstress Ella Fitzgerald break into the Los Angeles music scene. Because of segregation laws still in place in 1955, black people were not allowed in nightclubs. Monroe demanded that Fitzgerald be allowed to perform, promising the management of a popular L.A. nightclub that if Fitzgerald could sing there, she would ensure publicity and a packed crowd by sitting in the front row every night for a week.

The FBI had monitored her for years.

In part because of her political views, the FBI monitored Monroe’s activities for years. Her marriage to the left-leaning playwright Arthur Miller was also viewed as suspect, particularly considering Miller’s stand against Senator Joseph McCarthy. He led a series of anti-Communist “witch hunts” in the 1950s.

The FBI files were sealed for years and were heavily censored when finally released to the public. The complete files are available now, though huge parts are blacked out. According to the FBI, the original, untouched copies of the Monroe files no longer exist.

The FBI was never able to prove any ties to Monroe and communism, writing, “Subject’s views are very positively and concisely leftist; however, if the Communist Party actively uses her, it is not general knowledge among those working with the movement in Los Angeles.”

She was (possibly) involved with Bobby Kennedy.
Monroe’s rumour was involved with President John F. Kennedy and his brother, Robert Kennedy, persisted for years despite no evidence to support the claim. In 2016, however, The Telegraph reported that a letter confirming Monroe and Kennedy’s link was being put up for auction.

The alleged letter was sent to Monroe by Kennedy’s younger sister, Jean Kennedy Smith. “Understand that you and Bobby are the new item!” she wrote. “We all think you should come with him when he comes back East!”

The FBI was also investigating the suspected relationship between Kennedy and Monroe. J. Edgar Hoover, in particular, was determined to find anything scandalous that could implicate Kennedy. His deputy director, William Sullivan, later wrote in his autobiography, “Hoover was desperately trying to catch Bobby Kennedy red-handed at anything he ever did. We used to watch him at parties.”

While Hoover eventually concluded that “the stories about Bobby Kennedy and Marilyn Monroe were just stories,” speculation remains.

A lot of evidence surrounding her death was destroyed.
According to The Independent, “key forensic evidence went missing shortly after [Monroe] died.” Many “key witnesses” from the night of her death have provided contradicting stories to make things even more suspicious.

Other things that might have given us some insight into Monroe’s last days were destroyed. According to Vanity Fair, her half-sister wrote in her memoir My Sister Marilyn that Monroe’s business manager, Inez Melson, went through her things after her death. “We sat around the fireplace watching Inez burn papers all day long,” she wrote. Melson also changed the lock on one of Monroe’s filing cabinets.

According to Dr. Noguchi, a fresh bruise was on Monroe’s hip. When he examined her stomach, he found no traces of the dye that coated the Nembutal capsules that claimed her life. He later admitted that he should have tested her internal organs instead of performing toxicology tests on the blood and liver. “I am sure that this could have cleared up a lot of the subsequent controversy, but I didn’t follow through as I should have,” he told The Telegraph in 2009. “I think that was a great shame. Not suspicious. I’m not saying that; it was a perfectly normal procedure. But still a shame.”
While he was adamant that Monroe’s death was a suicide, weeks after he performed the autopsy, he asked the lab to test her other organs, but they had already been destroyed. His story had changed somewhat since 1985 when he told a reporter that the star might have been murdered. At that point, he called for the case to be reopened.

“Lawford is reported as having made ‘special arrangements’ with Marilyn’s psychiatrist, Dr. Ralph Greenson, from Beverly Hills,” reads the file. “The psychiatrist was treating Marilyn for emotional problems and getting her off the use of barbiturates. On her last visit to him, he prescribed Seconal tablets and gave her a prescription for 60 of them, which was unusual in quantity, especially since he saw her frequently. On the date of her death. Her housekeeper put the bottle of pills on the night table. It is reported that the housekeeper and Marilyn’s secretary and press agent, Pat Newcomb, were co-operating in the plan to induce suicide.”

On that day, Kennedy reportedly “made a telephone call from St Charles Hotel, San Francisco, to Peter Lawford to find out if Marilyn was dead yet.”

Many people still believe she did not kill herself.

The suspicious circumstances surrounding Monroe’s death have led many to demand the case be reopened. A change.org petition led by a private investigator claims that “if you look at all of the stories, books, testimonies, and even evidence, then there is no reason that Marilyn Monroe’s death certificate should not be changed.” The petition asks to have a criminal investigation around her death reopened.
Many conspiracy theories speculate Monroe was murdered, some of the more credible than others. Some people believe aliens abducted her, while others are convinced that it was part of a government cover-up to prevent her from revealing her relationship with Bobby Kennedy.

She was an excellent cook.
Perhaps Monroe would have been happier if she had been a wife and a mother instead of an internationally celebrated star. She indeed longed for the simpler things in life. After her death, many recipes were found in her home, and it was thought that she planned to one day write a cookbook.

Experts who studied Monroe’s recipe for stuffing said it had the “unmistakable balance of fussiness and flexibility that is the hallmark of an experienced and confident cook.”

Her notebooks reveal a powerful way with words.
Monroe’s papers were published in 2010, providing a complex view of the film icon. BBC calls her words “the writings of a poet,” proving for once and for all that she was a far cry from the simple-minded beauty she portrayed.

Her writings show her frustration at dealing with day-to-day life and the people around her. “I can’t stand Human beings sometimes — I know they all have their problems as I have mine — but I’m too tired for it. Trying to understand, making allowances, seeing certain things that just weary me,” reads one entry. Another, dating back to the 1940s shortly after her marriage, says, “all this thought and writing has made my hands tremble. Still, I want to keep pouring it out until that great pot in mind is, though not empty, relieved.”

It’s clear from her notebooks that “having a sense of myself” was of great importance. “I can and will help myself and work on things analytically no matter how painful,” she wrote.

The legend lives on
What happened to Marilyn Monroe? Was she murdered as part of a government plot? Conspiracy theorists would certainly have us think so.

Perhaps tales that her death was anything but a suicide have persisted for so long because we do not want to believe that someone as beautiful and radiant as Monroe could take her own life. She was a woman who seemingly had everything in the world to live for. But these things are not always enough. Anyone can experience depression, no matter how perfect their life may seem. Monroe’s story is not just a tragic one, but one that reminds us that things are not always as they appear to be.

Whether or not she killed herself, one thing is for sure: she will forever remain a beloved icon of American cinema. 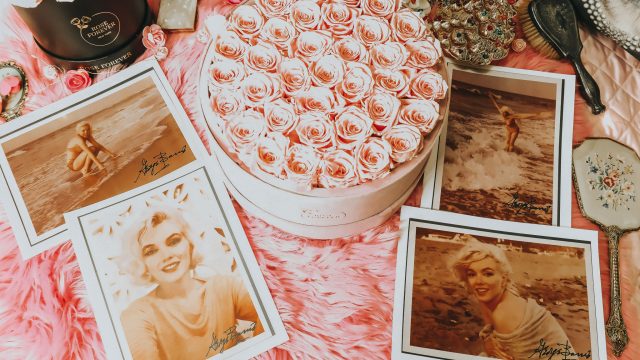 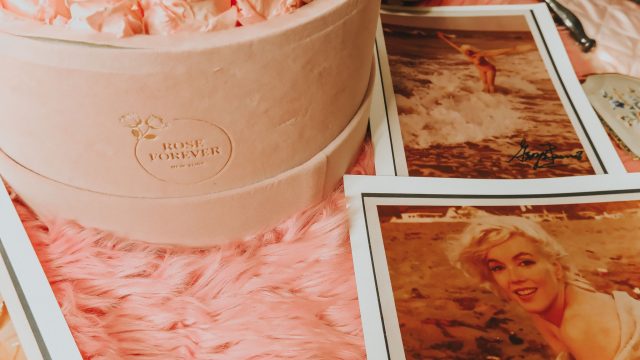 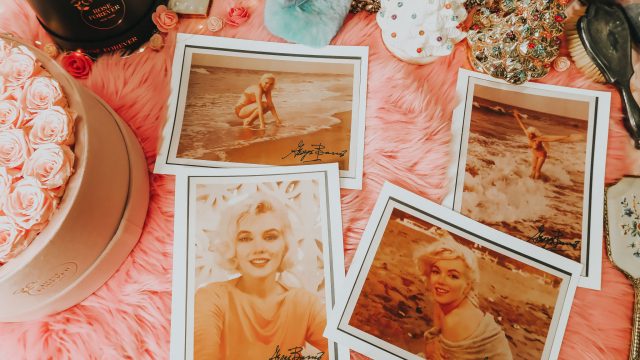 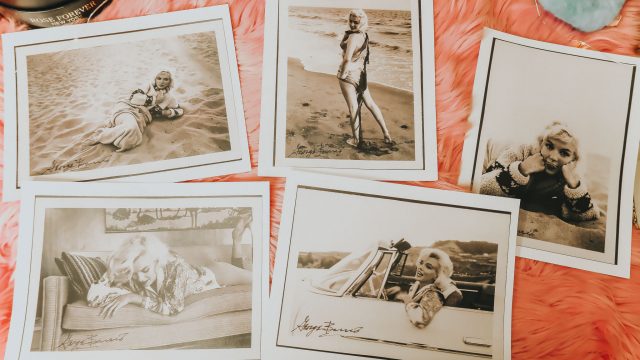 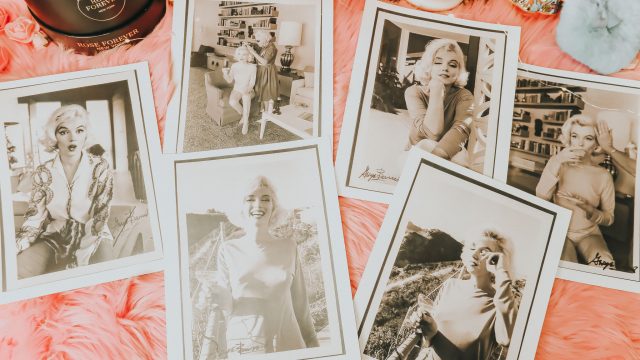 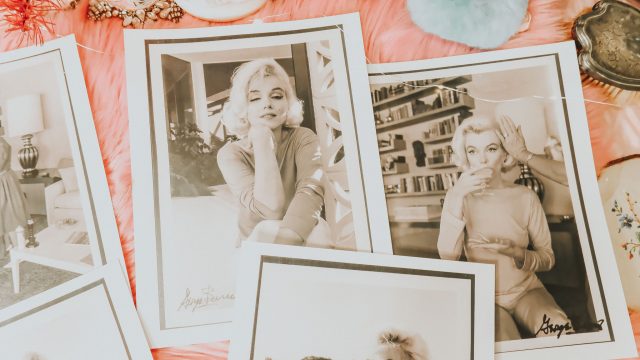 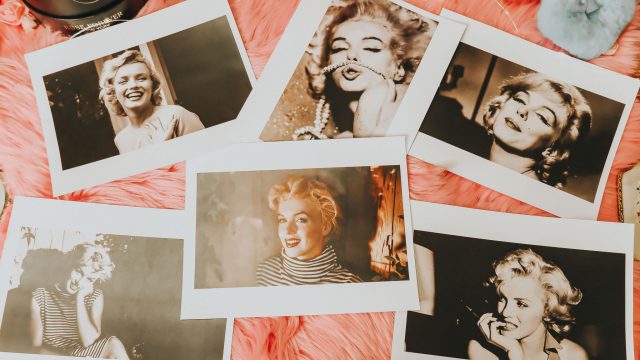 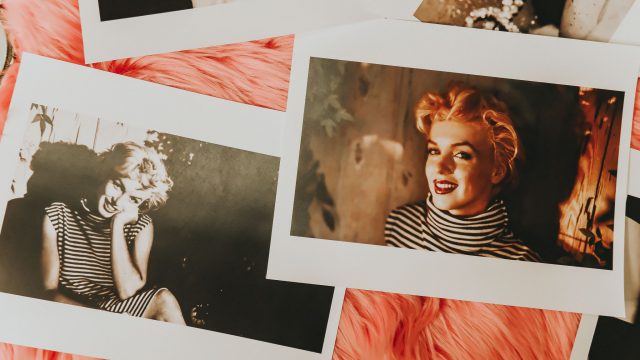 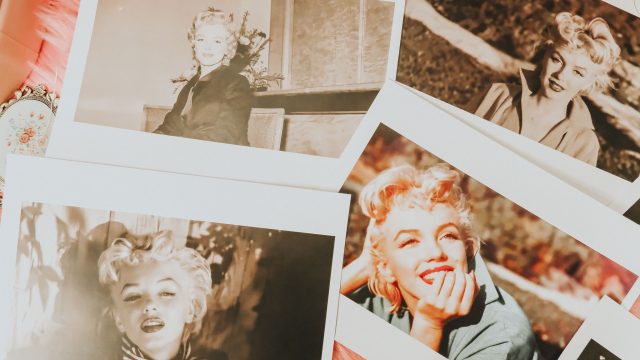 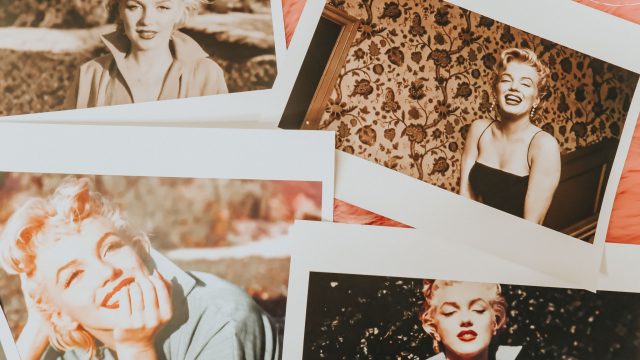 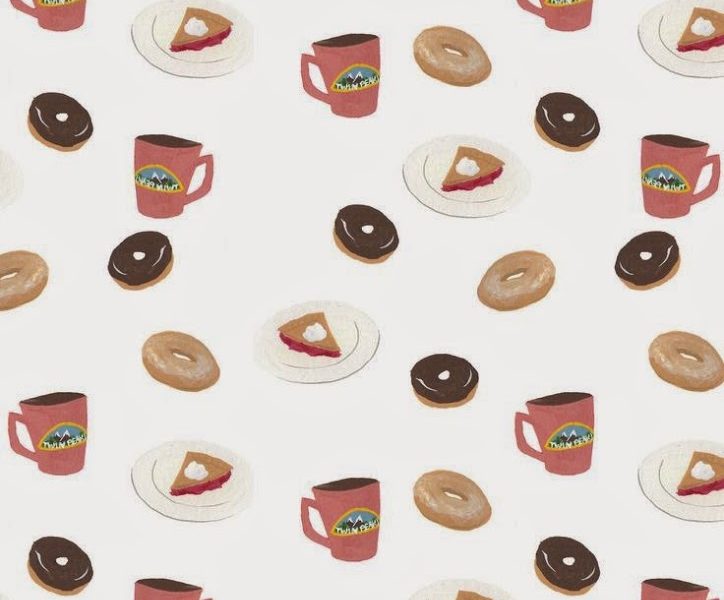 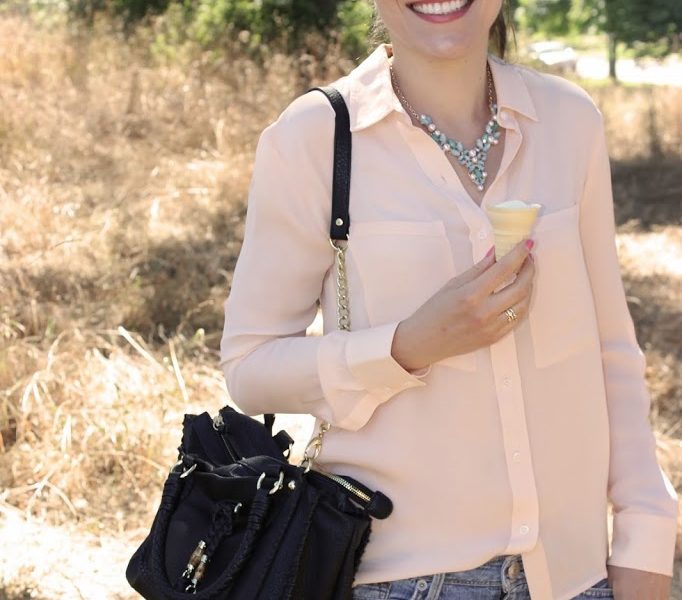 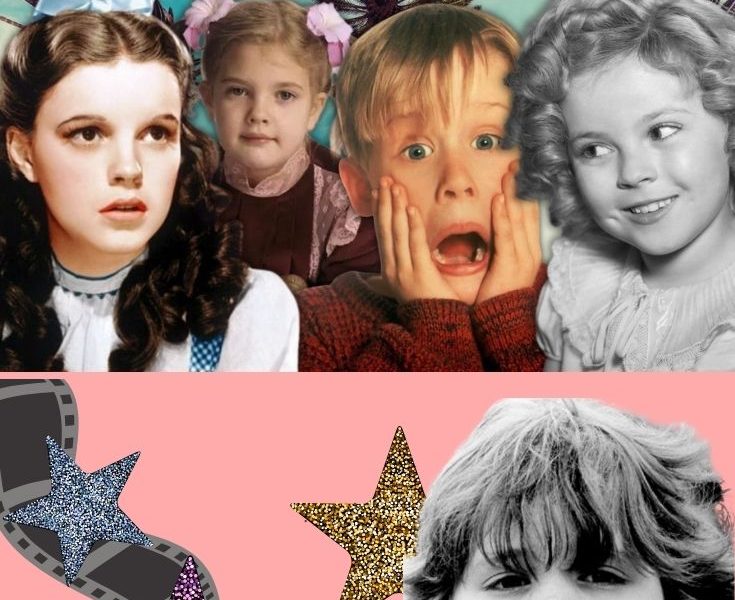